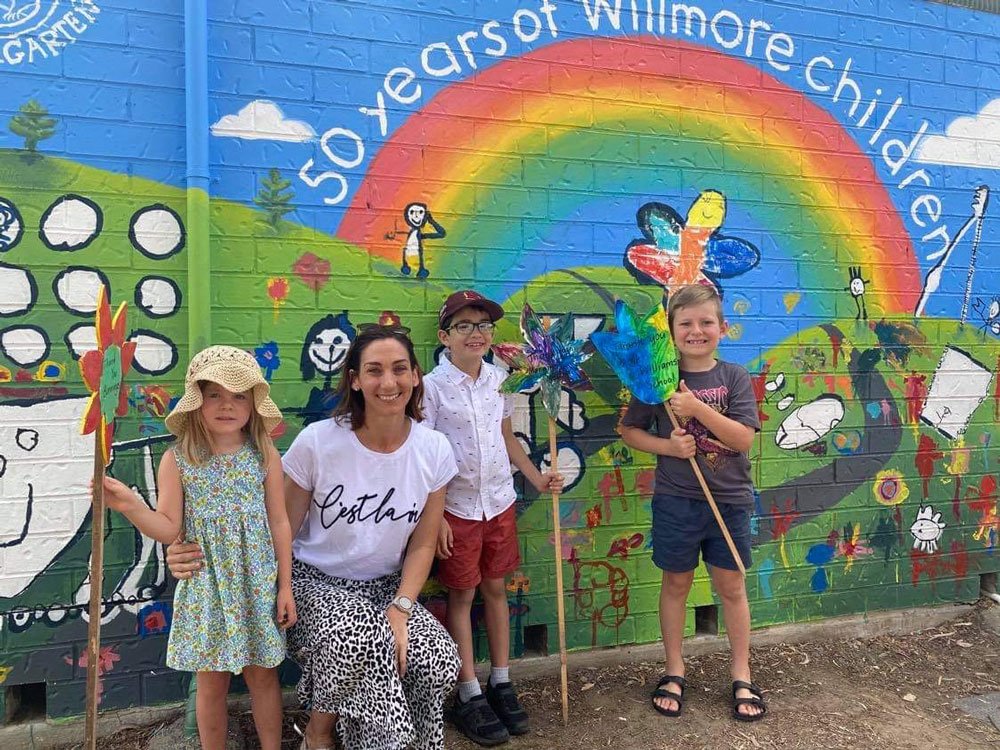 Pictured (from L-R) is present student, Eadie Crump, with Claire Bennett and past students Zac Lewis and Arthur Morse infront of the mural.

Although a big party couldn’t take place this year due to COVID -19 restrictions, the Willmore Kindergarten community still wanted to mark this important milestone on their calendar.

It was decided that a small group of past and present teachers, along with committee members, would gather on Saturday 17th October at the George Willmore Park, Ferny Hills, to celebrate 50 years of Willmore.

Festivities were kicked off with the revealing of the new mural on the toilet block at the park. The children had helped plan the concept of the mural, which was ‘What they liked to do in The Hills?’ These concepts, were included in the final design, which was painted by two very talented kindy mums, Rebecca Holland and Kimberley Oehlman. The kids had also had the oppurtunity to show off their artwork skills, having been escorted down to paint their designs on top of the mural earlier in the month.

As a kind nod to the community support the kindy has received, ‘thank you’ flowers were also on display around the mural. These large, hand-cut, wooden flowers were painted by the children and supplied by The Mens Shed. Each was inscripted with a ‘thank you’ to every community partner that has supported them over the years.

Following the unveiling of the mural, the group strolled up to the kindy, where the group spent some time sharing stories and looking through old kindy photos. For past directors and committee members, it was a wonderful chance to see some of the changes that have been made to the kindy over the years.

One of the most exciting things for the children (and educators!) in the lead up to the celebration has been the unearthing of the time capsule. The time capsule had been buried at the kindy in 1995 (as part of the 25 year anniversary celebrations). Each day leading up to the 50th anniversary, the children revealed one item out of the time capsule, which gave some insight into what it was like being at kindy in 1995. Some items included; a 1995 Coca Cola calendar, a phone card, a Barbie and Power Ranger, a poster with all of the 1995 kids’ hand prints and names, along with letters from the 1995 kids, teachers & committee members. The kindy will be burying the time capsule with memorbilla back into the ground at the end of the year so that it can be unearthed at the next 75 year celebrations!

Lastly, but certainly not least, the group enjoyed a beautiful cake donated by a local cake maker, Brisbane Cakes By Design, and sang Happy Birthday to the kindy!

Advertise directly into your target area at a price that is affordable.

Check out our newspapers online.

Join our newsletter and get news in your inbox every week!